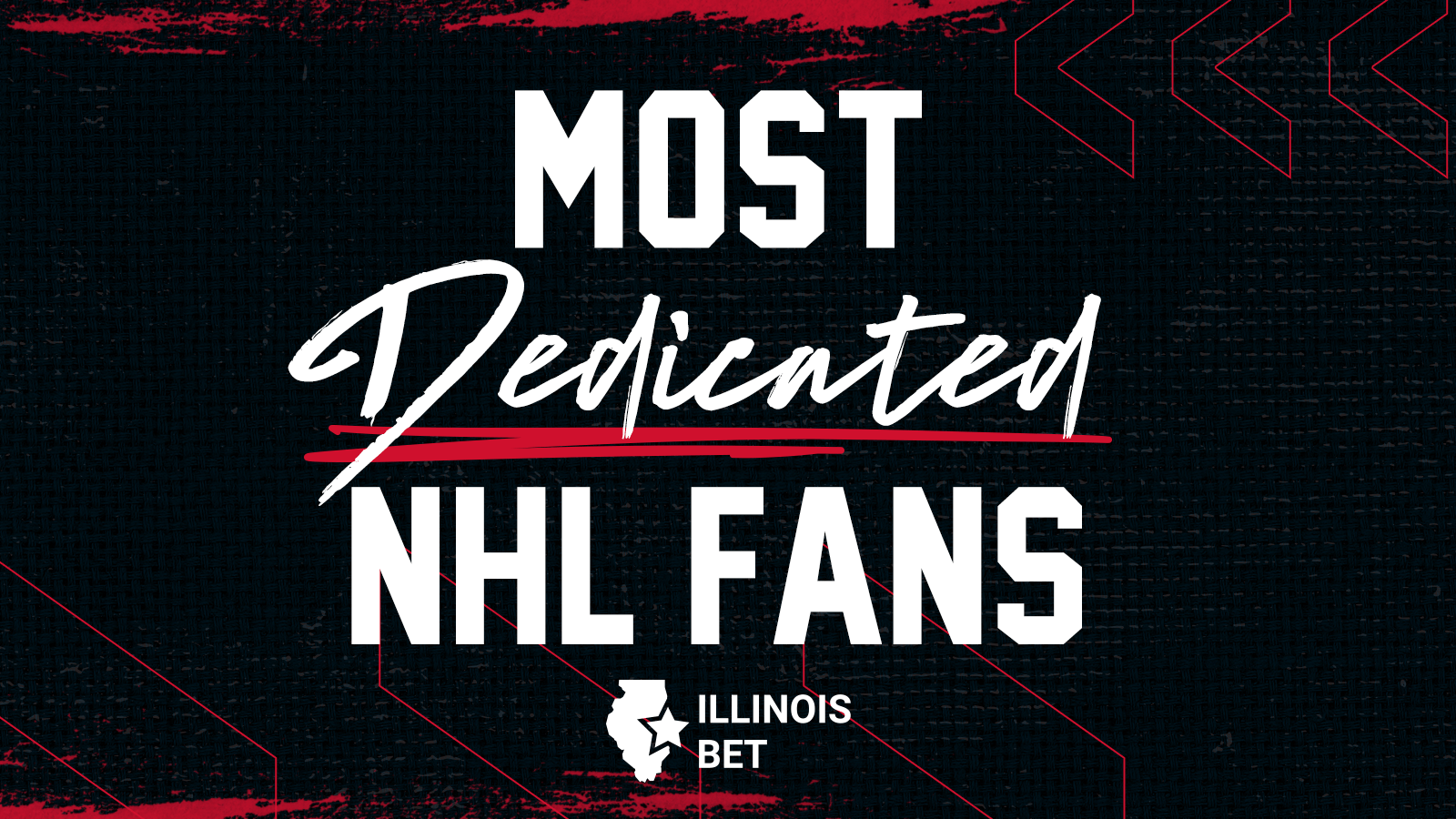 The NHL returns to the ice in early October, and Illinois sportsbooks and hockey fans have been clamoring for the season to resume ever since the Colorado Avalanche captured the Stanley Cup last summer.

In fact, their home Chicago Blackhawks will open their season against the defending champion Avalanche with a game in Colorado on Oct. 12.

Ahead of the new season, IllinoisBet was curious which team has the most dedicated fans. We then developed a matrix system to rank the 31 NHL teams (omitting Seattle due to a limited sample) based on their level of fandom.

Risk Free Bet Up To $1,000 - Bonus Code: ILBBONUS
ILBBONUS
Terms apply for all bonuses. Must be 21+ to participate. 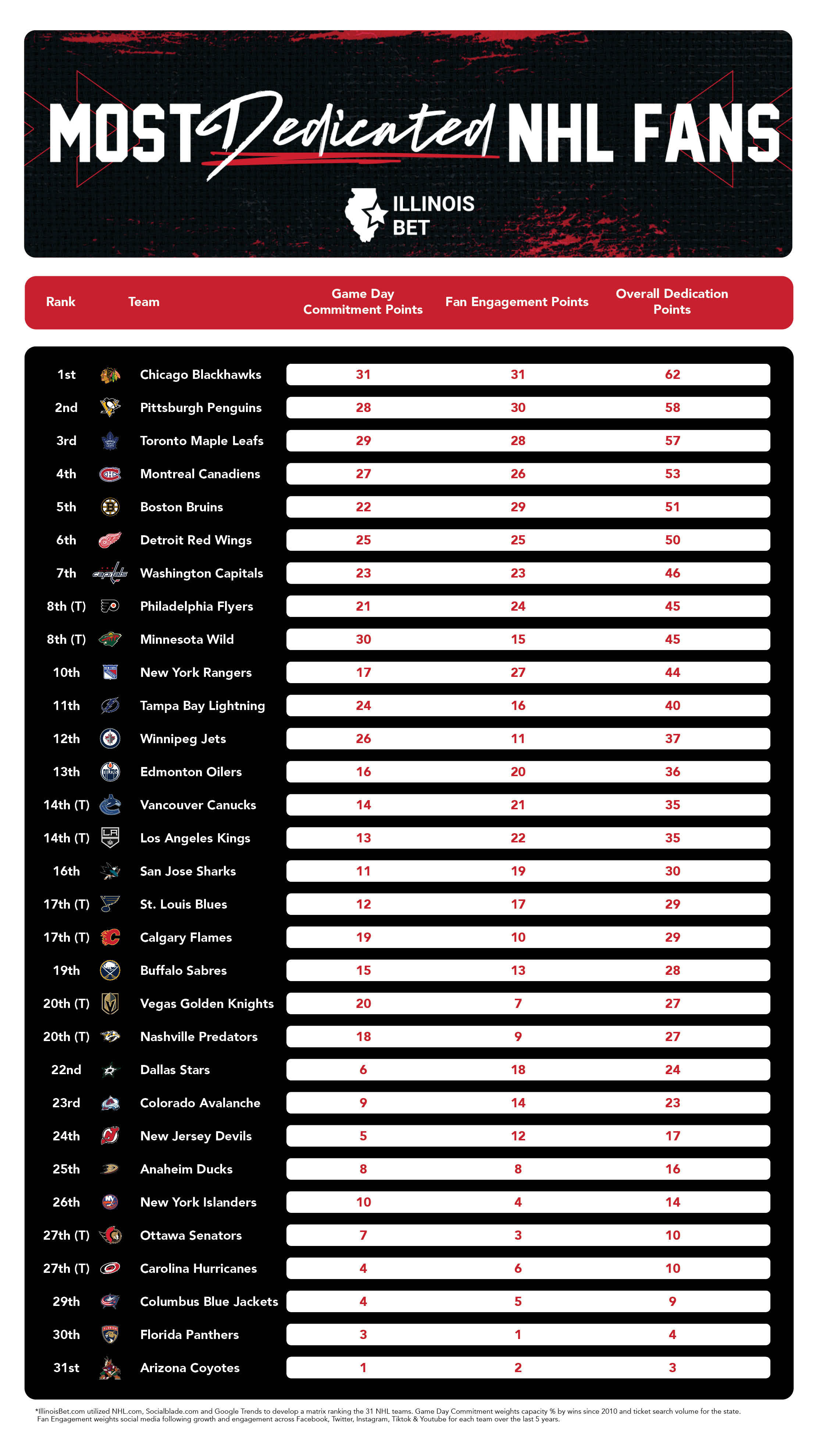 With multiple Stanley Cup victories in the time frame researched, it came as no surprise the Chicago Blackhawks wound up at the top of the model, leading both categories to edge out the Pittsburgh Penguins for first place.

The Penguins also enjoyed multiple championships over the past decade and have had marketable superstars Sidney Crosby and Evgeni Malkin on their team for the entire time. Not to be outdone, Chicago’s dynamic duo of Patrick Kane and Jonathan Toews have remained together since before 2010, winning Stanley Cups in 2010, 2013 and 2015.

Having as much team success as they have, as well as having those two superstars in the lineup every night, spearheaded the Blackhawks to their ranking as the team with the most dedicated NHL fans.

This ranking will be put to the test over the next few years, as that core has aged, and Kane and Toews alone are no longer enough to put the Blackhawks in the playoff race. They were one of the worst teams in the league last year and once again project to finish near the bottom of the standings. According to BetMGM Illinois, the club actually has the worst odds to win the Western Conference at +15000.

There are rumors of Kane and Toews both being traded out of town, with the only bright spot being the chance to acquire the first overall pick in the upcoming draft featuring generational talent Connor Bedard, who would have a Crosby-like impact on the team on and off the ice.

Off-ice scandal has also hit the Blackhawks hard in the past year, and if they can’t win back the loyalty of some fans, their ranking will certainly fall.

2nd Chance Free Bet Up To $500
Activate Code
Terms apply for all bonuses. Must be 21+ to participate.

The two categories used were ‘Game Day Commitment,’ a weighted grouping of capacity percentage by wins since the 2010 season (eliminating the two shortened COVID seasons) and the amount of ticket searches in the state or province of that team.

The second category is ‘Fan Engagement,’ a weighted grouping of social following growth over the past five year and engagement with each club’s social media channels, including Facebook, Instagram, Twitter, Tik Tok and YouTube. These numbers were gathered via SocialBlade.com.

NHL teams were ranked from first to last in each category and given points based on their ranking. First place received 31 points per category, second received 30, third received 29 and so on until the 31st ranked team received only one point per category.

Stay close to IllinoisBet for the best NHL betting apps in Illinois.