It’s been a rocky 21st century for Chicago Bulls fans and those interested in Illinois NBA betting, in the wake of one of the most dominant stretches in professional sports history.

The post-Michael Jordan Bulls went from the proverbial penthouse (winning six titles in eight years between 1990 and 1998) to the outhouse (failing to advance past the Eastern Conference semifinals since 2011).

Between the tenures of Tom Thibodeau, Fred Hoiberg, Jim Boylen and Billy Donovan, the lone constant for Bulls fans has been early exits come playoff time — with the franchise’s two postseason appearances since 2015 ending in the first round.

Year Three of the Donovan era in the Windy City got off to a solid start, with the Bulls beating the Heat on the road, 116-108 in their opener.

But it appears Illinois sports betting sites aren’t buying the team as a bona fide title threat, as Chicago has +4000 odds of winning their first title in a quarter-century.

Overall, Chicago ranks in a tie with Toronto for 16th on the BetMGM Sportsbook Illinois title odds board and sits in the ninth in Eastern Conference odds at +2500.

Risk Free Bet Up To $1,000 - Bonus Code: ILBBONUS
ILBBONUS
Terms apply for all bonuses. Must be 21+ to participate. 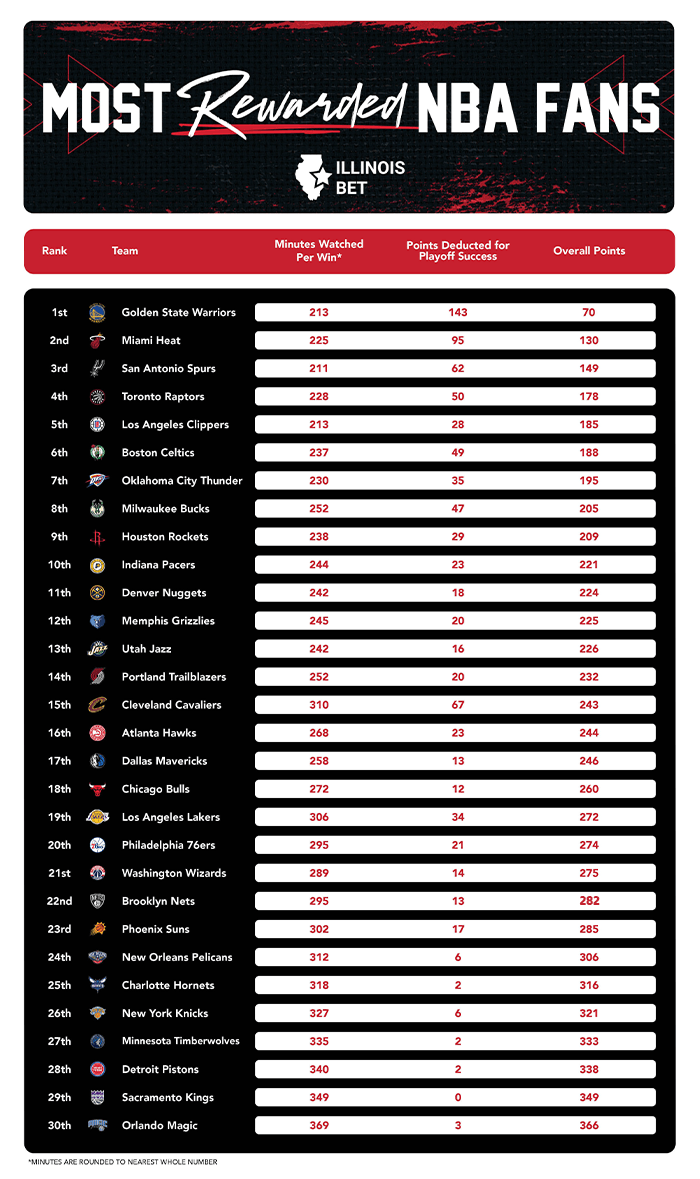 Where Bulls Fans Rank in the NBA for Being Rewarded

IllinoisBet.com developed a ranking system of the 30 NBA teams to find what fanbase has been rewarded the most over the last 11 seasons.

The first category — “Minutes Spent Per Win” — was determined by taking the amount of regular season games played by each team (from 2011-12 season to 2021-22 season) multiplied by the average length of an NBA televised game (2 hours, 13 minutes). Once we calculated that number, we divided it over the number of wins during those same seasons to arrive at the minutes watched by fans per regular season win over the last 11 seasons.

The second category — “Points Deducted for Playoff Success” — was utilized to decipher the value of seeing playoff success during those 11 seasons gathered in the first category. The point values were 1 point per playoff berth, 3 points per playoff series win, 3 points per NBA Finals appearance, and 15 extra points for NBA Championship win. After adding all the points together for every postseason from 2011-12 season to 2021-22 season, the points were deducted from Category 1 to arrive on the final points and rankings.

In total, our survey found Bulls fans spent the 17th-most time per win, at 272 minutes, with the 23rd-most points for playoff success, at 12, giving Chicago a total score of 260 points.

That sum gave Bulls fans the 18th spot on our list, sandwiched between Dallas (246 points) and the L.A. Lakers (272 points).

Whether Lonzo Ball and company can bring the Bulls their first NBA title since 1998 in the year ahead remains to be seen.

For now, at least Chicago fans can take solace in knowing their beloved basketball team is far from the least-rewarding franchises in the league, despite their lack of on-court success over the past few decades.

For the latest on the NBA and all the Illinois sportsbook promos, come to IllinoisBets.com.

How Much Illinois Sports Betting Action Will World Cup Generate?

Christopher Boan is a lead writer at IllinoisBet.com specializing in covering state issues. He covered sports and sports betting in Arizona for more than seven years, including stops at ArizonaSports.com, the Tucson Weekly and the Green Valley News.