How Do Bears Fans Feel About Possible Move Out of Chicago?

Perhaps the only thing drawing more conversation in Chicago than the Bears’ current QB situation is where the team plans on playing in the near-distant future.

The NFC North stalwarts, who are 2-2 this season after Sunday’s 24-14 win over the Detroit Lions, signed a deal with Churchill Downs Inc. on Sept. 29 to purchase Arlington Park.

The $197.2 million purchase price means the Bears could depart Soldier Field, where the team has played its home games since 1971, as soon as 2026 — according to CBS Sports. Arlington Park is in Arlington Heights, Illinois, about 30 miles from Chicago.

Team President and CEO Ted Phillips said in a statement that the Bears are ready to move into the next phase of discussions about its future home with all interested parties.

"We are excited to have executed a Purchase and Sale Agreement (PSA) for the Arlington Park property," Phillips said in the statement. “… Finalizing the PSA was the critical next step in continuing our exploration of the property and its potential. Much work remains to be completed, including working closely with the Village of Arlington Heights and surrounding communities before we can close on this transaction.

“Our goal is to chart a path forward that allows our team to thrive on the field, Chicagoland to prosper from this endeavor, and the Bears organization to be ensured a strong future. We will never stop working toward delivering Bears fans the very best experience. We will continue to provide updates on our progress at the appropriate time."

The Bears' lease with the city of Chicago to stay at Soldier Field allows them to end the deal in five years, the report said. That could pave the way for the team to take over the racetrack and develop it as they see fit.

Churchill Downs Inc. CEO Bill Carstanjen congratulated the Bears for their ability to secure the Arlington Park grounds, paving the way for the first new NFL, MLB, or NBA facility in the city since Guaranteed Rate Field opened in 1991.

“It is clear they are committed to an exciting vision for their team and their fans,” Carstanjen said in the release. “We wish them the greatest success and are excited for the opportunity this brings to the Village of Arlington Heights and the future economic development of this unique property."

A survey of 100-plus Bears fans by IllinoisBet.com show their sentiment about the potential move to Arlington Park: 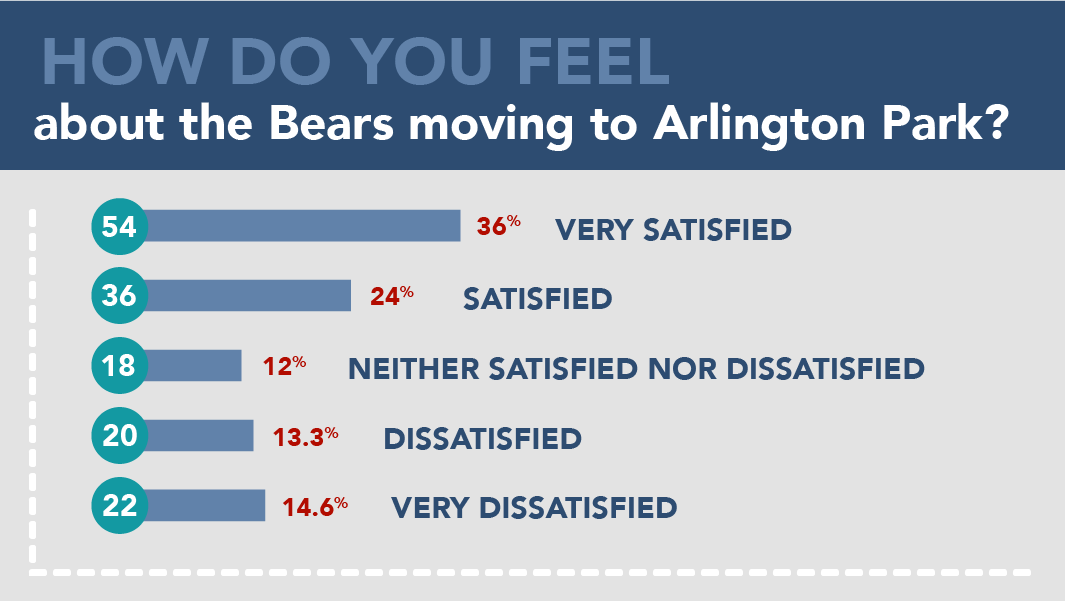 It appears as if Bears fans won’t be shedding a lot of tears if the team packs up and leaves Soldier Field in the coming years.

By comparison, just 42 of the respondents (28%) said they were either “disappointed” or “very disappointed” by the team’s hypothetical move to Arlington Park. 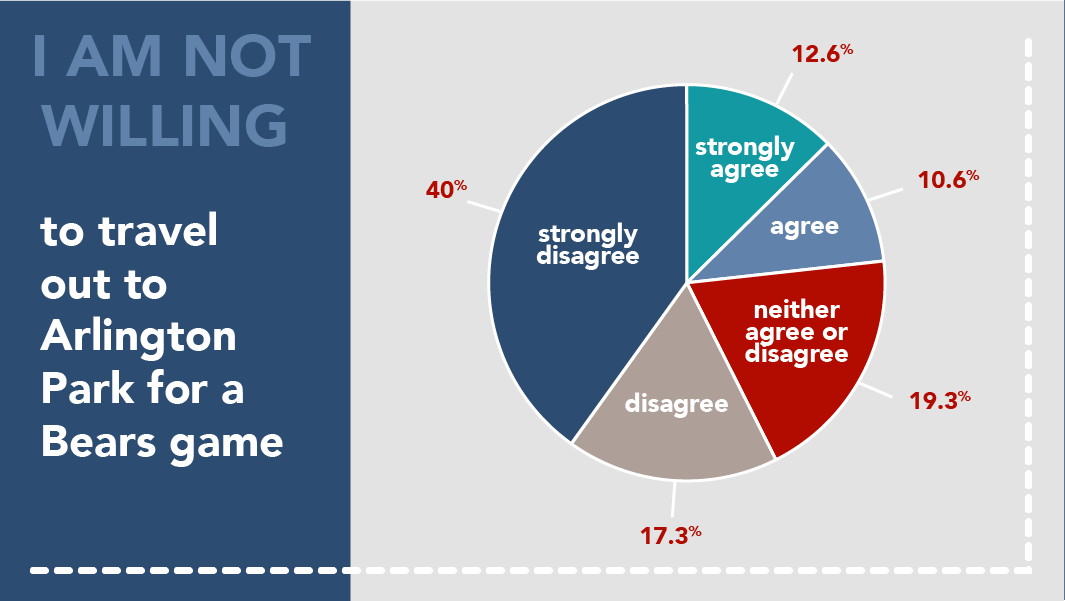 More Than 57% Say They Will Attend Game in New Area

It also appears that Bears fans in Chicago have little concern about making the 31-mile trek up Interstate 90 West to the Arlington Park site. 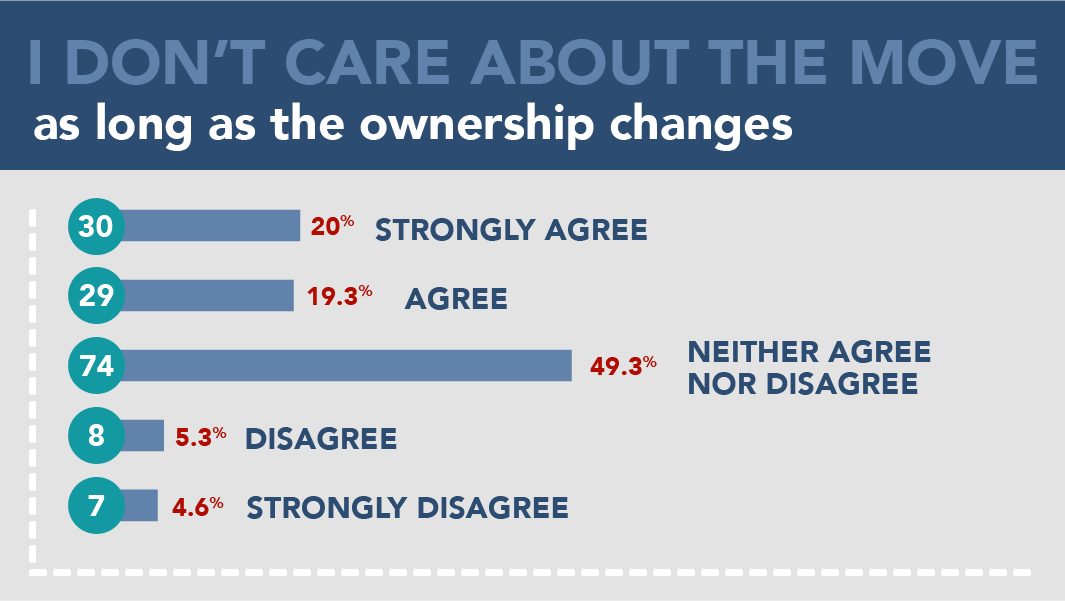 With Team Move On Horizon, Most Fans Feel Confident in Ownership

Perhaps the most apathetic response from those surveyed about the Bears’ stadium situation was whether they cared about the move, so long as 98-year-old Virginia Halas McCaskey no longer owns the club.

Of those that responded, 49.3% indicated they “neither agree nor disagree” with the sentiment, while 20% said they “strongly agree”, and 19.3% saying they “agree” with it.

A total of 10% of the respondents (15 out of 140) said they either “disagree” or “strongly disagree” with the statement. 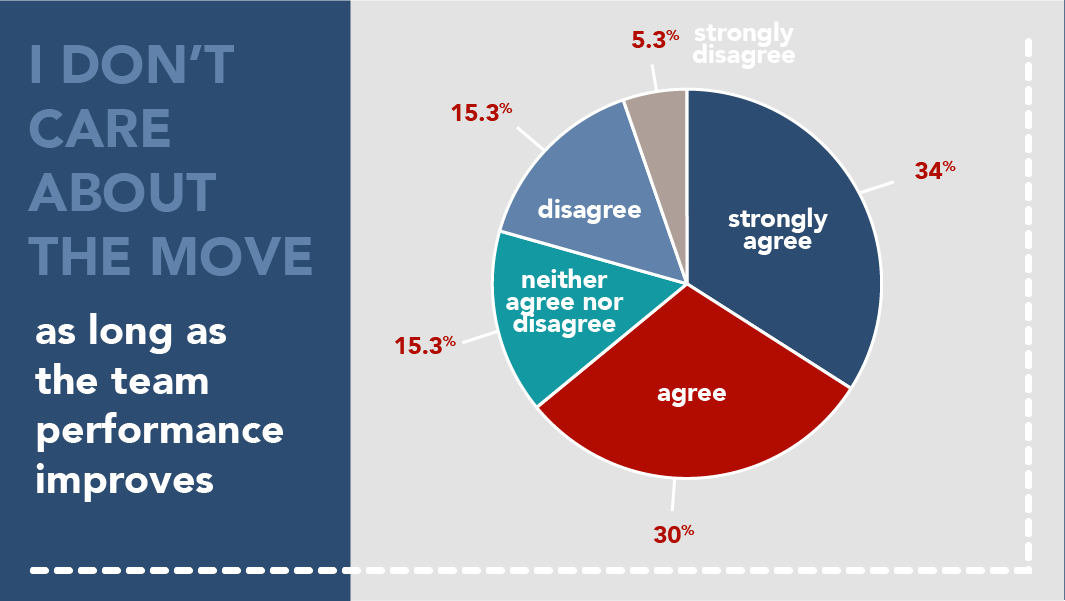 Some 64% of those that responded to the IllinoisBet.com survey said they either “agree” or “strongly agree” with the statement that they don’t care about the Arlington Park move if the team performance improves.

That sentiment comes as the Bears look to qualify for the NFC Playoffs for the second year in a row and clinch their first NFC North division crown since 2018.

It appears as if the only thing that’s tougher for the Bears to achieve than beating the 3-1 Las Vegas Raiders on Sunday afternoon is selling their fans on the status quo. 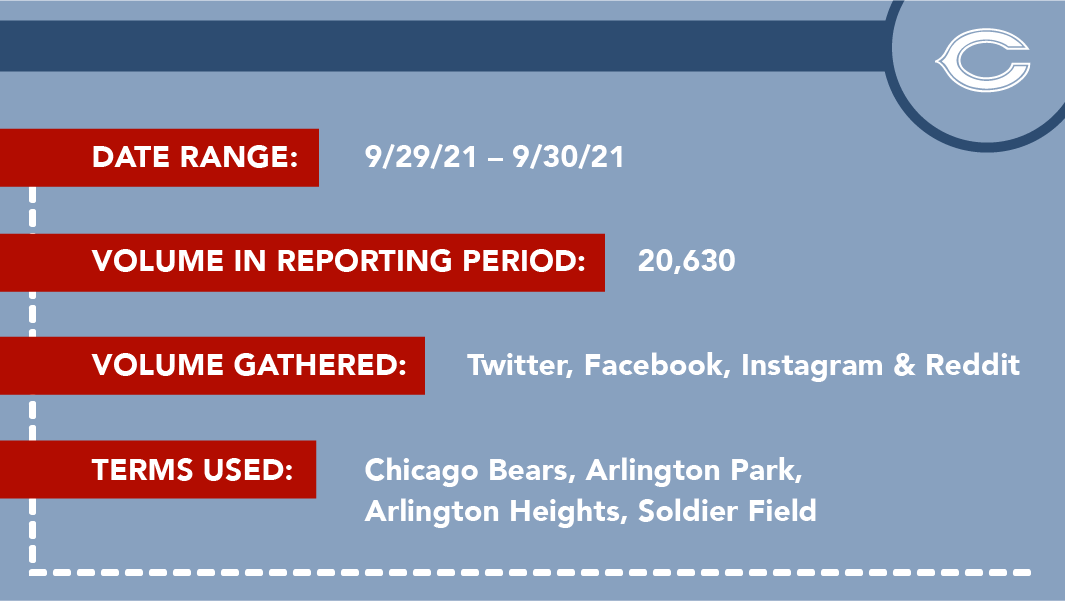 The graphic and data that was acquired came via our social listening study over the course of the day when the news was announced and the following day.

Most of the messaging around the potential move to Arlington Park was positive — 66% of social posts.

The social messages included in the social listening study show people who are in favor of the move and those against it.

The survey results were conducted through SurveyMonkey, with six questions pertaining to the topic. Results were gathered via three Chicago Bears Facebook groups, r/CHIBears reddit page and 2 Chicago Bears forums.

When using this data and research, please attribute by linking to this study and citing http://www.illinoisbet.com.

2nd Chance Free Bet Up To $500 - Promo Code: SPORTS
SPORTS
Terms apply for all bonuses. Must be 21+ to participate.

Were The Bears Among NFL’s Most Disciplined Teams Since 2018?

Christopher Boan is a lead writer at IllinoisBet.com specializing in covering state issues. He covered sports and sports betting in Arizona for more than seven years, including stops at ArizonaSports.com, the Tucson Weekly and the Green Valley News.