Meet Illinois’ Most Popular Athletes of 2022

For NBA supporters, the year started with disappointment, as the Bulls lost early in the playoffs, while the less we say about the Bears’ and White Sox' NFL and MLB campaigns, the better.

However, it’s been a strong year for individual performances, with many Illinois-born stars across each major league making a name for themselves. So, we wanted to compare the popularity of each to reveal the most hyped athletes from the Prairie State.

By collecting online and social media performance data for each NFL, NBA, NHL, and MLB star (who was actively playing at some point during 2022), we’re able to reveal the most popular players from Illinois over the last 12 months.

To do this, we created an index that considered five key factors with individual weightings adding up to 100.

These were: average monthly Google searches, Wikipedia page views, social media growth, social media mentions, and the percentage of online comments deemed positive. All of which were recorded over the last 12 months.

So, without further ado, read on to find out who makes the top five and where your favorites rank. And remember, keep tabs on IllinoisBet for the best Illinois sports betting promo codes. 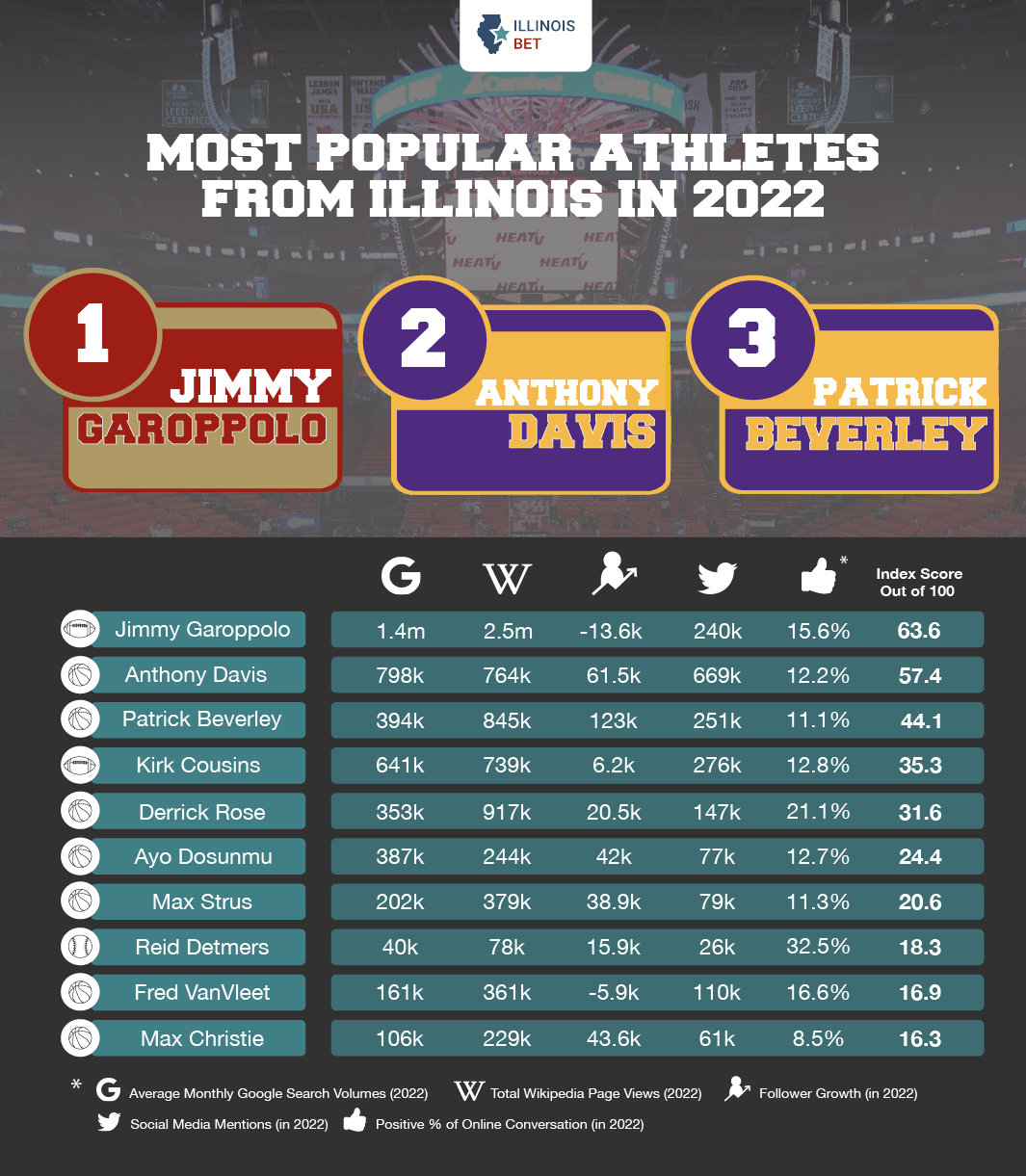 First Bet Offer Up To $1,000 - Bonus Code: ILBBONUS
ILBBONUS
Terms apply for all bonuses. Must be 21+ to participate.

Perhaps surprisingly, though, the quarterback had quite a significant decrease in follower growth in 2022, being down by 13.6k. So despite being the most popular sports star in Illinois, his social following seems to be dwindling. Perhaps it's because he just can't seem to stay healthy for a full season across Illinois NFL betting.

Still, with 240,000 social media mentions and a positive online conversation rate of 15.6%, it’s no shock that Jimmy G came out on top.

Davis essentially had the highest social media mentiosn in 2022, at a whopping 669,000, too. This is likely because he helped push the Lakers through to the NBA championship back in 2020, and his legacy lives on amongst fans who are hungry for another title with he and LeBron James leading the way.

With the highest follower growth in 2022 of all the players we’ve reviewed, at 123,000, Davis' Lakers teammate Patrick Beverley ranks third in our roundup of the most popular Illinois athletes with an index score of 44.1 out of 100.

Taking fourth spot among the most popular Illinois athletes is Vikings quarterback Kirk Cousins, with an index score of 35.3. Cousins has seen a startling 276,000 social media mentions this year, along with a follower growth of 6,200!

This could be due to the influential role he recently played in helping the Vikings earn victory in their first-ever home Thanksgiving game, winning 33-26.

Just a couple weeks later, Cousins led the Vikings to the biggest comeback in NFL history after overcoming a 33-0 deficit against the Colts on Dec. 17.

Over at BetMGM Sportsbook Illinois, Cousins is +25000 to win NFL MVP.

With 353,000 Google searches, Knicks player Derrick Rose (31.6) rounds out the five most popular Illinois athletes. With a 20,500-follower growth and 147,000 social media mentions, fans have certainly been keeping up with Rose’s progression this season.

So, there it is – the most popular Illinois athletes of 2022.

Now that you know where your favorite stars rank, according to our data, you can tell everyone you know.

In the meantime, stay close to IllinoisBet for more insights on the best Illinois betting apps.

Bet $5, Get $200 in Free Bets Instantly
Activate Code
Terms apply for all bonuses. Must be 21+ to participate.

To determine Illinois' most popular athletes of 2022, we created an index that considered five key factors with individual weightings adding up to 100.

To create the ranking, IllinoisBet.com combined the score of each factor to get a final index score out of 100. And the higher the score, the more popular the athlete!

Up to $1,250 on Caesars + WATCH & BET on Select NFL Games on the app - Promo Code: ILBFULL
ILBFULL
Terms apply for all bonuses. Must be 21+ to participate.

Were The Bears Among NFL’s Most Disciplined Teams Since 2018?